Barcelona, the old and still vibrant Spanish city on the Mediterranean. We wondered why we even booked a cruise leaving from there, as Spain had not been high on our bucket list. It just felt like the right place at the right time. It was, indeed! Barcelona is a sensory experience like no other. Here is an experience of sights, of course, but also of touch, listen, smell, and taste. And kindness.

Having arrived tired in the late afternoon, we ventured out onto La Rambla and found a very busy eatery, La Poma Pizzeria. For our first experience in Spain we had spaghetti bolognese. What can I say?

After a good night’s sleep we thought we’d explore La Rambla to get a feel for where we were. About a block down, we encountered a busy walkway off to our left with a triangular or V-shaped building.

Walkways went on each side. “Which way?” “I don’t know. Left I guess.” We followed a narrow passageway with some stores along each side. The sounds echoed softly as my wheelchair tires bumped across 500 year old cobbles.  Then came a steep incline that took both Sandy and me to get my chair up. At the top, a busy plaza and beyond that the Cathedral of Barcelona. Built largely in the 1300’s, it is is a magnificent example of Gothic architecture.

From its rough, stone walls that beg to be touched to the young man filling the square with his opera (not amplified) you can feel the vibrancy.

Just a few pushes of the wheelchair rims from the entrance of the Hotel 1898 is La Rambla. This is a wide pedestrian walkway running north and south from the circle in the north to the port and statue of Christopher Columbus at the south. Unlike the cobbles of the oldest part of the Gothic Quarter, La Rambla is a a wavy surface of rectangular tiles. My expectations were that they would ride rough, but the reality was that riding on them was a bit of a massage. 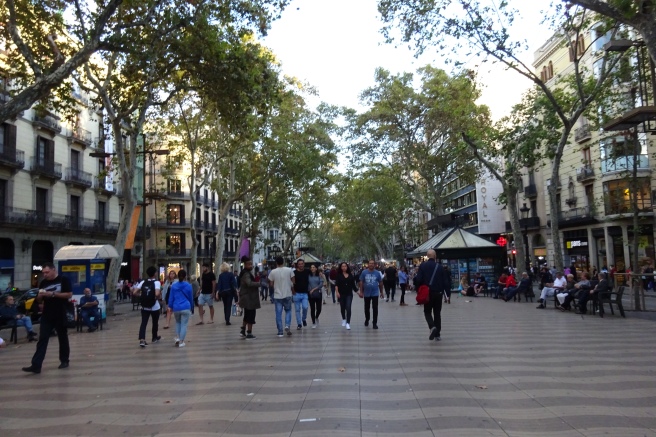 Along the sides of the walkway are shops selling souvenirs, gelato, and fresh flowers. Near the south end these give way to tables where tourists enjoy tapas and sangria. 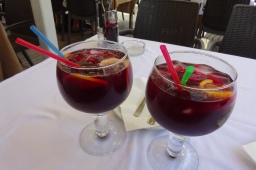 La Rambla is about tactile and sound. Mostly couples speaking softly in Spanish, English, French, and some Chinese create a blend that seemed almost musical. I’m sure this got “livelier” late in the evening, but this guy is seldom out late. This sensory delight is a full day’s experience if taken slowly.

Towering above a newer part of Barcelona is la Sagrada Familia. Still under construction, I wonder if it will ever be finished. The architect Antoni Gaudi spent the last 40 years of his life working on it full time, and he died in 1926. He is buried in the crypts. The lines were excruciatingly long. Learning about an area in advance often pays off. We went to the back side of the cathedral where there is an entrance for people with disabilities. Parts of the cathedral are not accessible, and some had a rather steep ramp. There is plenty to experience, anyway.

Towering pillars support a ceiling that is far up. With the stone walls and floor, stained glass windows, and columns sounds echo and reverberate gently creating a sense of awe that I’m afraid most visitors might not notice amidst the marvelous statuary and windows.

A word about accessibility

Barcelona is old, but much effort has been put into making it accessible to everyone. There are curb cuts with tactile warnings, designated pedestrian crossings on La Rambla, and a genuine effort. Buses are accessible. We took the big red on and off tour bus. All of its busses have low floors and ramps that flip out. Everyone was eager to flip the ramp, no hassles.

As I write this the day before Thanksgiving in the U.S., please be mindful that each of us has much for which to be thankful. Family and friends mean more than anything we can imagine. And when things seem overwhelming, remember the simple flip up ramps and the people eager to help. No one can do it all; try to be thankful for what we can do and build upon our strengths.

Next up, day stops at Cartagena and Malaga. Each of these had its unique charms. Thank you so much for stopping by. I appreciate all of you. Please comment and let me know what interests you and what questions you have for me. Be forewarned, I might answer them!

Photos: Main photo is la Sagrada Familia, a large Neo-Gothic style, unfinished cathedral. Ornate carvings fill the facade. Second photo is a busy pedestrian walkway with a V-shaped building creating 2 narrow walkways. On the right are the pedestrian cross walk sign and the store Mango. Third picture is the Cathedral of Barcelona towering into a blue sky with white clouds. To the left are the main spire and several smaller ones. The right is the stone, Gothic  building. Fourth picture is La Rambla. A tree lined pedestrian walkway with buildings on either side. The surface is ripples made of rectangular tiles. Fifth picture is 2 large glasses of red sangria with fruit floating and colorful straws. Sixth picture is inside la Sagrada Familia. Stone column literally soar toward the ceiling. In the background and to the right are the magnificent stained glass windows that fill the area with light.